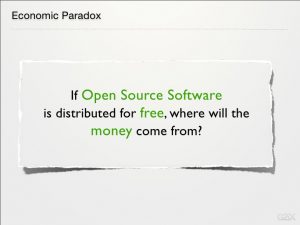 Since its inception in 1998, open source has become the de-facto standard for software development and proven itself as a viable business model. While making source code freely available for redistribution and modification may seem counterintuitive, the success of companies like Red Hat and Canonical are proof that an open source model can turn a profit.

Investment from multinational, enterprise companies like Google, Facebook, and Adobe, points to the growing value of open source and its longevity. It should come as no surprise: at the heart of open source is fast-paced innovation in the form of collaboration and knowledge sharing. When everyone is encouraged to work together, the rate of progress is greatly increased.

Today, open source in business is pervasive. However, to successfully leverage the model, it’s important to understand its origins.

Origins Of Open Source: Free As In Freedom

Started by MIT programmer Richard Stallman in 1983, the free software movement began as a response to restrictions of proprietary software, touting the philosophy that “the use of computers should not lead to people being prevented from cooperating with each other.” It wasn’t about free as in price, but free as in freedom.

In his early days at MIT, Stallman was involved with a code-sharing community and was discouraged by the nondisclosure agreements of proprietary licensing. He created the GNU Project, the first free software operating system, and left MIT out of fear they would claim ownership of the project and close-source it.

The GNU project made way for the “copyleft” or “viral” method of licensing: anyone can freely copy, modify, and distribute the code but cannot apply additional licensing restrictions. Essentially, the copyleft method, which would eventually manifest as General Public Licence (GPL), ensured any software created from free software remained free.

However, Stallman and proponents of the free software movement were the minority of the time. Rife with politics and a license that was seen by many as too liberal, free software was not attractive to businesses. It wasn’t until the term “free software” was rebranded as “open source” decades later that businesses began to catch on to the benefits of open and collaborative coding communities.

Flexible Licensing And The Commercial Sponsor

Open source and commercial interest were tied from the start. When the free software movement was rebranded as “open source” it was done in an effort to make free software principles more appealing to businesses.

The Apache Software Foundation was one of the first projects to incorporate under the open source moniker. The ASF set many precedents for how open source should be approached commercially, including creating the Apache License which allowed for the same freedoms as the GPL without requiring that derivative works be distributed under the same license. This new, flexible license paved the way for commercial interest to monetize open source software.

The ASF also introduced a new way for open source and corporations to interact: companies could be represented in the foundation by individual participants. Maintaining an open source project’s autonomy and community is critical, and this allowed for businesses to have an influence without monopolizing the project.

These approaches to open source and business have become the inspiration for running open source projects and are still emulated today.

As the movement continued to gain mainstream popularity and traction, GitHub brought open source to the world with the pull request. Making it easier than ever to contribute spurred an unprecedented network effect. It was the network effect and speed at which open source communities could innovate that ultimately caught the attention of software executives.

While more companies were ready to leverage the open source as part of its business strategy, the question shifted from, “should we get involved?” to “what’s the business model?” Additionally, in order to reap the benefits of open source, there is a community to maintain.

Dual licensing emerged as an early approach to the open source business model. Under this model, a company offers the same software under two different licenses, one that is open source, and the other proprietary. They can control the software, and contributors sign over their copyright. This model took away power from the contributor and instilled fear within the open source community. The purchase of MySQL by Oracle was a seminal event, and evidence that the fears were not unfounded. In fact, the original creators of MySQL forked the project, renaming it MariaDB, to protect its open source status.

Even as open source becomes a default for business, the community is still the key to its success. 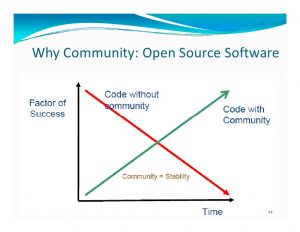 Open Source As The New Go-To-Market

Open source is the nucleus for collaboration and building great software. As these benefits continue to pay dividends, leveraging open source has become a default business model. However, there are times when it is rife with obfuscation, abuses of loyalty and commercial companies who disregard ethics.

To succeed as an open source company, you must first be a good steward of open source. This means no freemium schemes or artificial restrictions, allowing open source and proprietary software competition, and removing barriers to contributing.

This co-creation allows for unmatched speed of improvement and depth of functionality which benefits us all. Open core companies like Elastic, Docker, Mesosphere, Magento, and more, have shown us that it’s possible to be a good steward of open source and turn a profit without jeopardizing the well being of the open source community.

Being good stewards of open source has paid off for us at GitLab. Our business model depends on open source contributions and we’ve prioritized improving our open source edition, even so far as switching from a contributor license agreement (CLA) to a developer certificate of origin (DCO) to make it easier to contribute.

Source of this article: https://www.forbes.com/